"Carnivores of Can't-Go-Home" to appear in new anthology 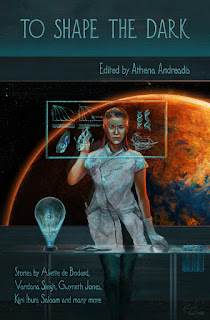 I'm delighted to have a story of mine included in To Shape the Dark, an exciting new anthology that's coming out next year. The editor is Athena Andreadis, a molecular biologist who also writes stories and essays. You may also know her as the author of The Biology of Star Trek. In 2013 she edited The Other Half of the Sky, an anthology of mythic space opera with women protagonists which got a tremendous positive response, with rave reviews and myriad awards and other recognition.

To Shape the Dark will present science fiction stories about female scientists, mathematicians, or engineers living in universes where they don’t have to choose between work and family. There are also various other parameters designed to avoid tired SF tropes.

My story, "Carnivores of Can't-Go-Home," was a lot of fun to write. It involves two botanists on an alien planet where insects are enormous, and carnivorous plants are too.