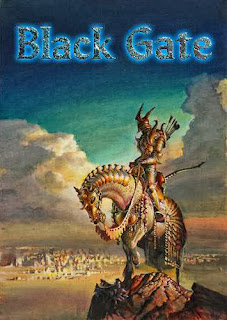 In the Bad Bayous, the water changes objects that soak too long into “wily things,” with odd and unpredictable properties.

Sixteen-year-old Yonie Watereye helps people with wily thing trouble. She's got a special knack for analyzing wily traits and behavior—or at least, that's what she tells her customers. In fact, it's Yonie's cat LaRue who does the work behind the scenes, but LaRue--like any other wily animal--will be killed if her true nature is found out.

In this story, Yonie and LaRue deal with a most peculiar object: an antique boat gong whose powers turn out to be far more insidious than they had guessed.

"The Wily Thing" was published in Black Gate 12 (Summer 2008.)
Read an excerpt
Purchase a PDF of the issue

An absolute delight. The setting is fascinating and original, every detail crafted in prose with real charm.” --Lois Tilton, Internet Review of Science Fiction

A strong offering, “The Wily Thing” is odd, but unique. This was my favorite tale of the issue. --John Ottinger III, Grasping for the Wind