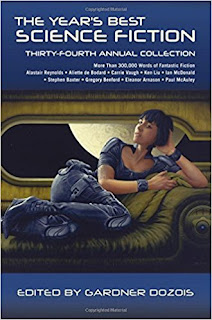 I was excited to hear that my short story "Carnivores of Can't-Go-Home" earned an Honorable Mention in The Year's Best Science Fiction: Thirty-Fourth Annual Collection. This anthology is the latest in the highly respected sf series from renowned editor Gardner Dozois.

In all, he honored two thirds of the anthology! Editor Athena Andreadis pulled off a similar coup with her previous sf anthology, The Other Half of the Sky. Athena, you are on a roll!